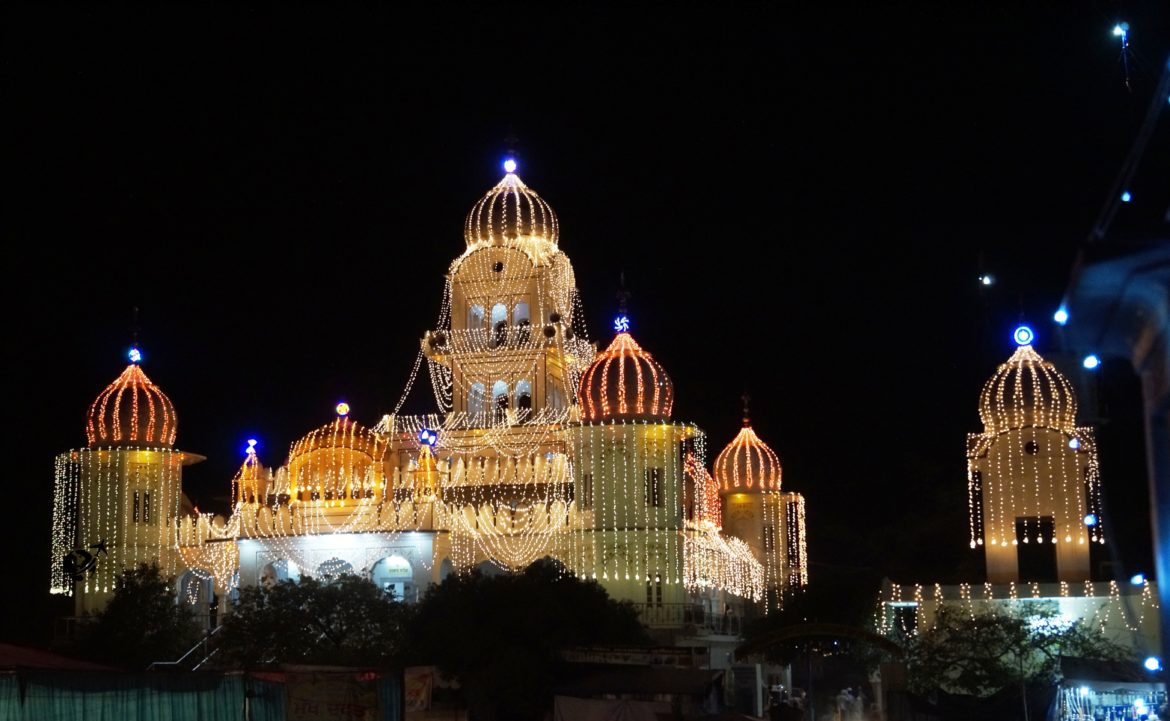 Baisakhi is to Talwandi Sabo what Hola Mohalla is to Anandpur Sahib. During the 2-day Baisakhi fair, the dusty little town of Talwandi Sabo, around 30 kms from Bathinda, is aglitter with colourful lights, its streets brimming with devotees.

While Anandpur Sahib’s Hola Mohalla has in recent years climbed up the popularity charts and made a place for itself in the state government’s tourism brochures, Talwandi Sabo’s Baisakhi celebrations largely remain a regional affair. For some reason, not many know that Baisakhi Fair at Talwandi Sabo is one of the major fairs held in Punjab. 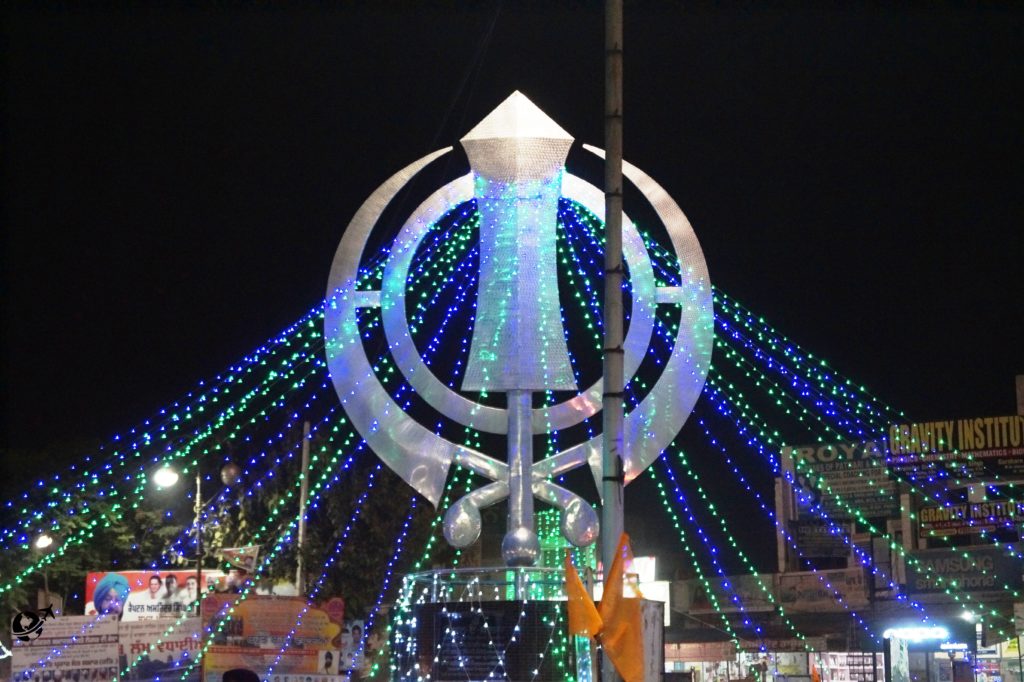 The settlement of Talwandi Sabo is synonymous with Takht Sri Damdama Sahib, one of the five Takhts or Seats of Temporal Authority of Sikhism. It was here that the tenth Sikh guru, Guru Gobind Singh rested after defeating the Mughals at Muktsar (Battle of Muktsar) and took a long hiatus, during which time he revised and recompiled the sacred scripture Sri Guru Granth sahib.

While Baisakhi had traditionally been a harvest festival, the day also marks the foundation day of the Khalsa Panth. It was on Baisakhi day in the year 1699 that Guru Gobind Singh laid the foundation of Khalsa Panth and baptized a batch of five disciples (Panj Pyaare) making them Singhs, a martial community to defend against religious tyranny and oppression.

To commemorate the occasion, every year on Baisakhi, a grand fair is held at Talwandi Sabo and Sikh devotees from across the state arrive to seek blessings of the tenth guru and to celebrate the festival.

I arrived in Talwandi Sabo on Baisakhi eve, just as the evening had started to darken. The day had been long and hot, and I was looking forward to having an early night and exploring the town the next day. But the sight of fairy lights and lively streets were inviting enough to inspire me to set off for the Gurudwara complex right away. Here are some photos I could manage to take during my nighttime wanderings. 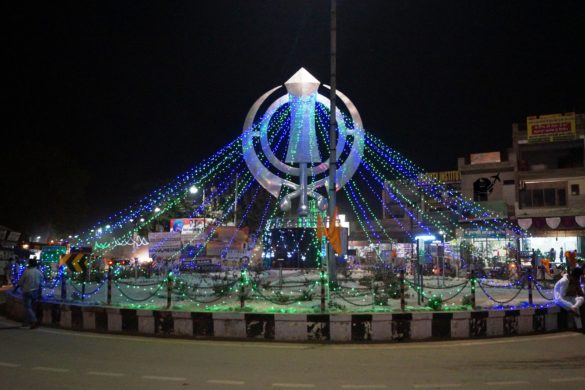 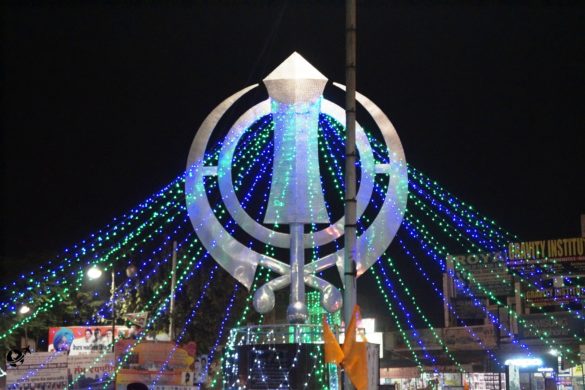 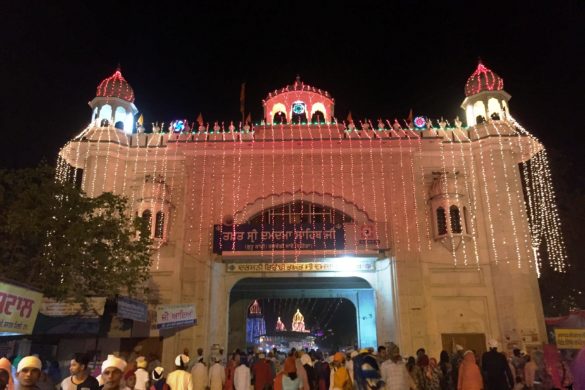 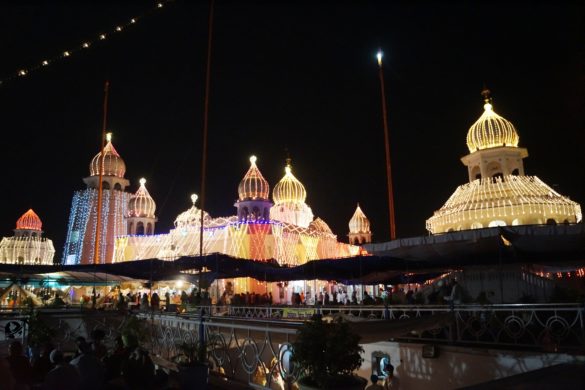 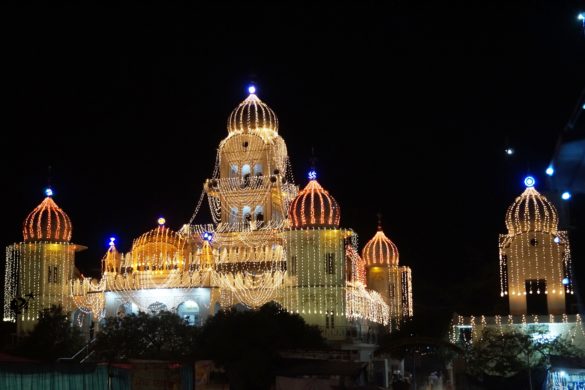 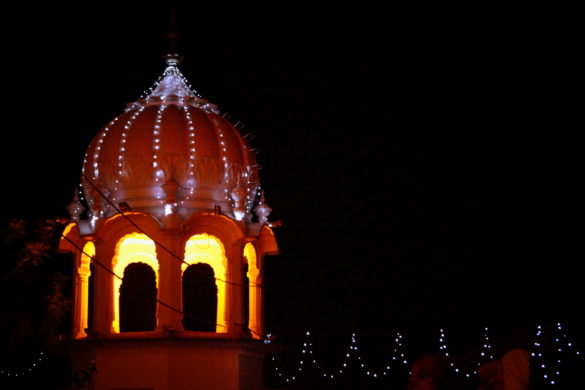 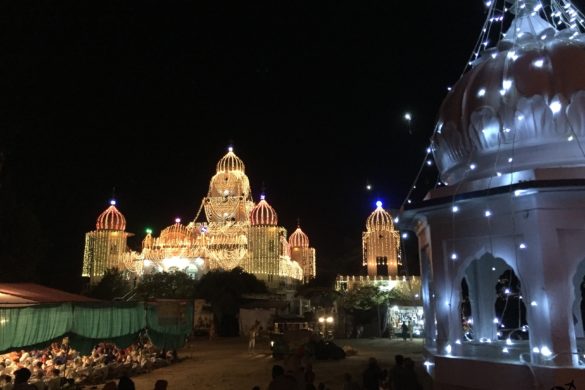 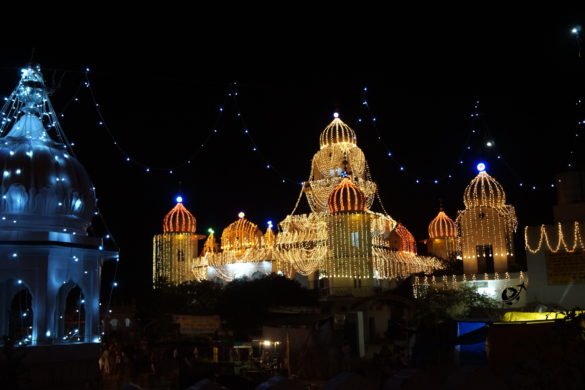 As the Baisakhi day broke, the town appeared jam-packed with hordes of devotees arriving to pay obeisance at the historic Damdama Sahib gurudwara. Throughout the day, despite the harsh sun, the rush of believers flowed into the gurudwara unabated. 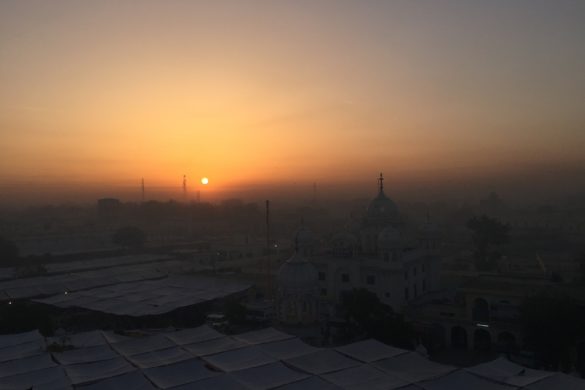 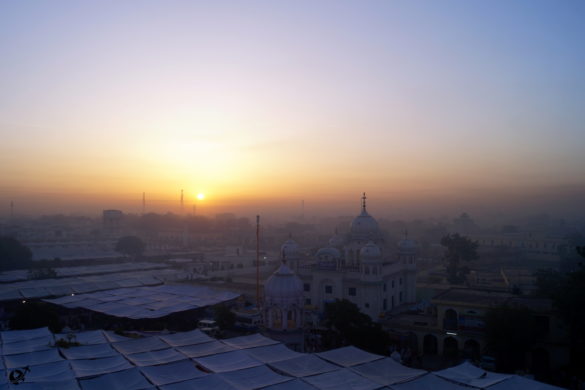 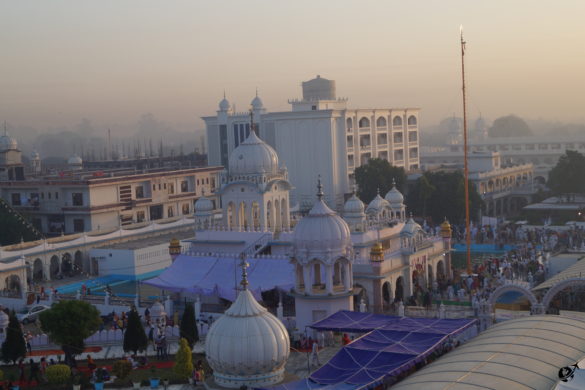 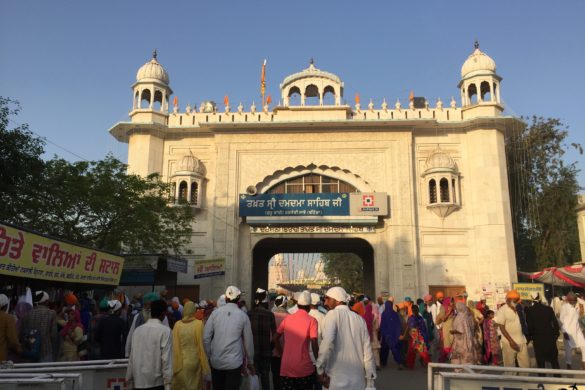 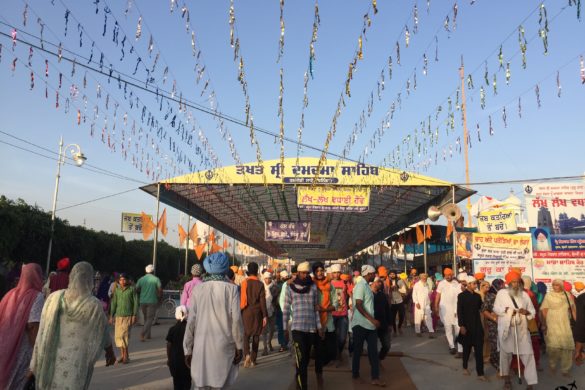 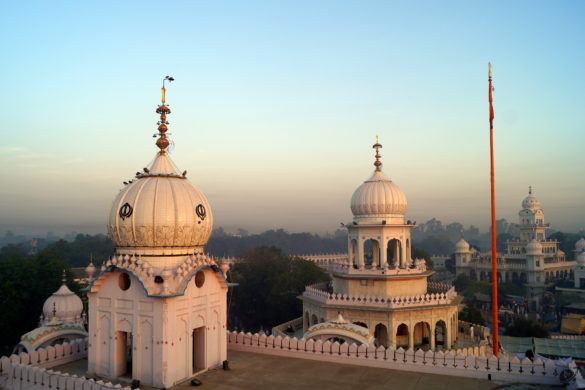 While the gurudwara complex appeared choc a bloc with the faithful, the streets too had their share of the crowd thronging the stalls put up for the fair. Stall after stall selling traditional prashaad items, sweets, and trinkets seemed to be everyone’s favourite. I had a nice time wandering the streets and observing the rural crowd cracking deals with the traders. 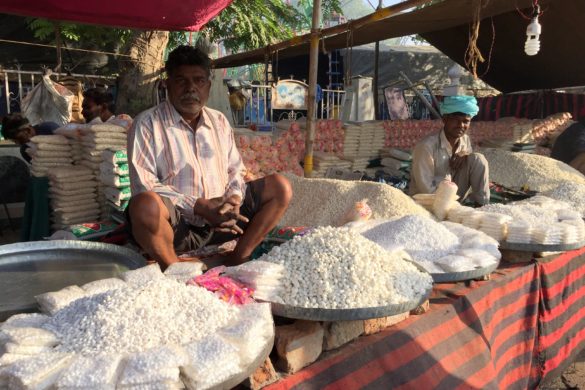 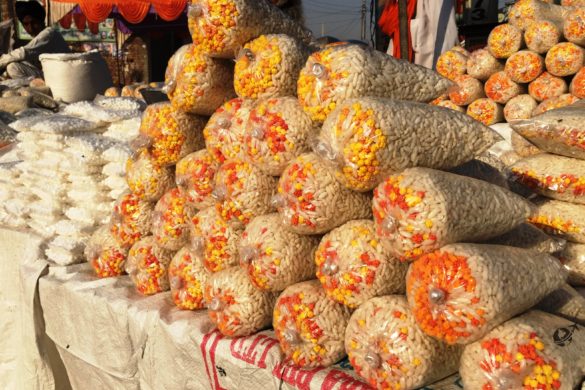 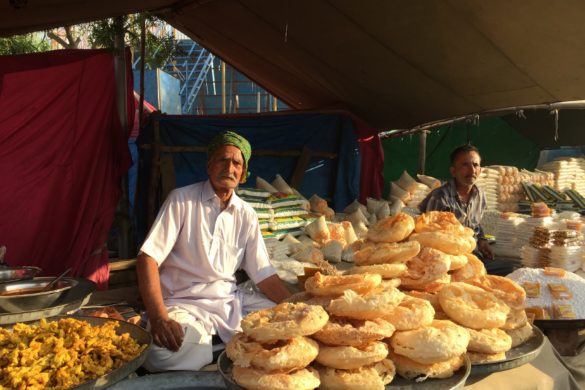 Now wrapping this up with a little reality check – Bhangra-in-the-wheat-fields on Baisakhi like we keep seeing on all those Baisakhi WhatsApp forwards and e-greetings has now become a thing of the past.  In modern times, with combine harvesters changing the harvesting dynamics in the country, manual harvesting has become outdated. The combine harvesters are expensive to hire, so everyone wants the harvesting done as quickly as possible. 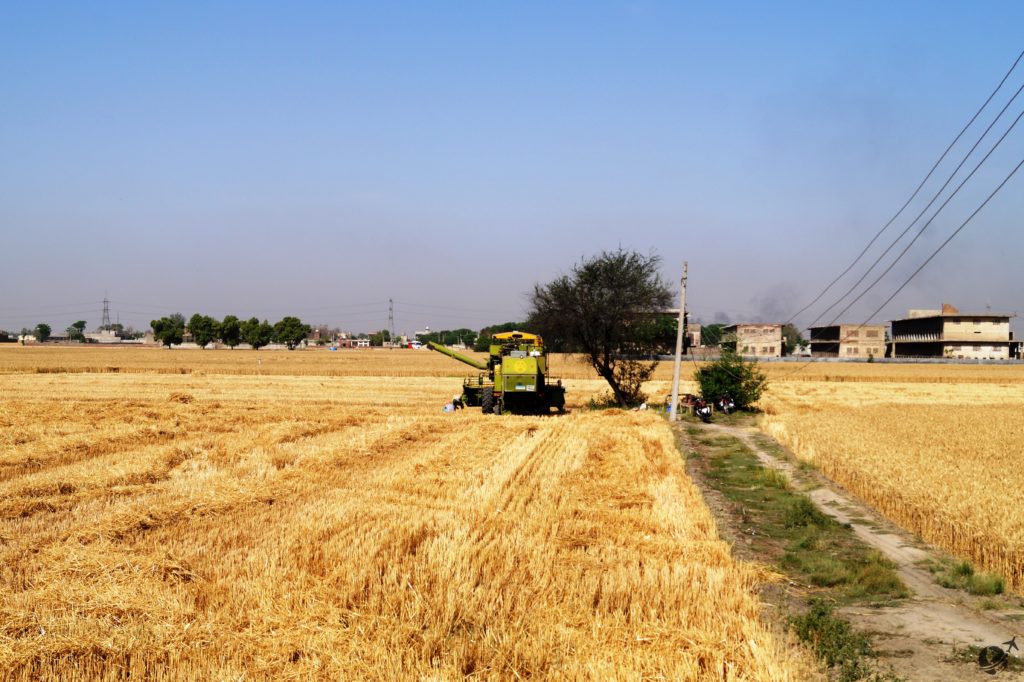 Moreover, April gets too hot to be dancing in the fields all decked up in fancy clothes. Maybe in some parts of the state, they do some token celebrations in the fields but from what I saw during my travels across the state there was hardly any extra soul in the fields other than those absolutely required.

Talwandi Sabo is roughly 30 kms from Bhatinda.
The city is well connected via train and bus to other cities of Punjab as well Delhi.
One can take a train or bus to Bathinda and from there can take a public transport bus or hire a taxi to Talwandi Sabo.

The pics are lovely. Though modern way of life has replaced many traditions, yet the spirit and festivity of Punjab is infectious!

Very nice photography and also the description, loved reading it. Specially liked the pics of Sun.

Thanks for taking us on the trip to one of the most revered places.

Lovely photos, both night and day’s. 🙂 Now that tourism is growing in Punjab, the day is not very far when Talwandi Sabo Baisakhi also gets onto tourism map.
These little known festivals keep us grounded.
Have explored only the Amritsar area, rest of the Punjab still very new for me. 🙂

Very interesting how you note how the celebrations have changed with the advancement of technology. Certainly, while these things have certainly had life easier, a WhatApp e-greeting is infinitely less charming than the traditional approach and while combine harvesters are certainly more efficient, it is sad to think of the loss of a way of life and even jobs. Nevertheless, as your photos show, there is still an immense about of charm to be found here

I loved reading this, thanks for sharing your writing and photos 🙂

India celebrates many such festivals and it is always great to read about them in detail. I have never been to Punjab, would love to visit the state when the traditional celebrations are in full swing. That is what makes travelling in India worthwhile 😊

Glad to discover this post. Everybody knows Hola Mohalla but I’d never heard of Talwandi Sabo. Love the photos of the skyline at different times of the day. Would like to try some of those food too.

Thank you, Jitaditya. Punjab is lovely in early and late winters. Let me know if you plan to visit. 🙂

Enjoyed the description as well as the photos. You arrange everything nicely. Feeling inspired to witness how much labour and thought you put into your work.

Thank you so much, Sushant ji. Glad you enjoyed the post.