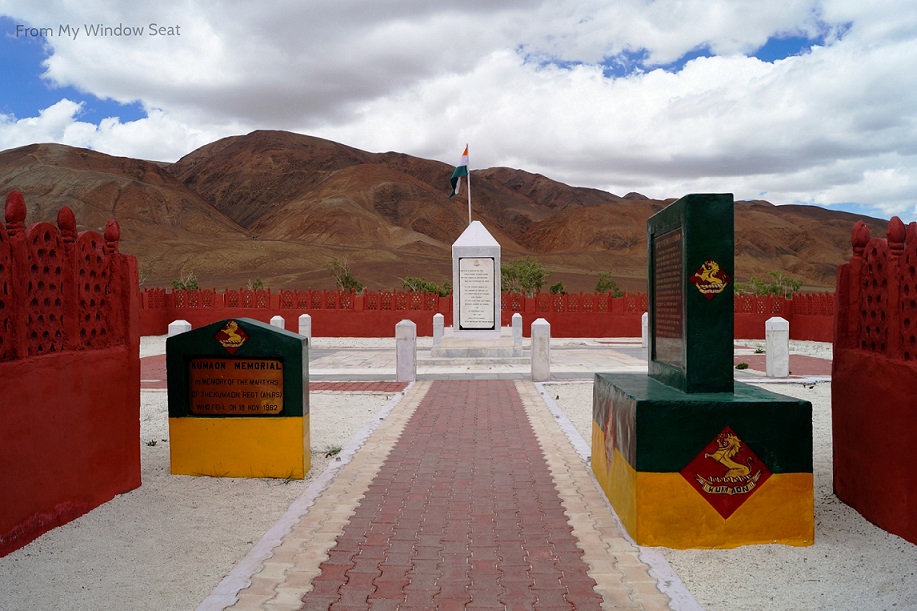 In the barren, bleak land of the Chushul valley in Ladakh, stands the Rezang La Memorial – a solemn testimony to the supreme sacrifice of the bravest of the brave Indian soldiers. It was here at Rezang La that the lion-hearted jawans of the Charlie Company of 13 Kumaon Regiment fought the fiercest battles of their lives against the invading Chinese soldiers.  114 of these 120 brave hearts laid down their lives in this onslaught, but not before they had annihilated a large chunk of the enemy. The war memorial, erected by the 13 Kumaon Regiment commemorates their ultimate last stand and service to the nation. 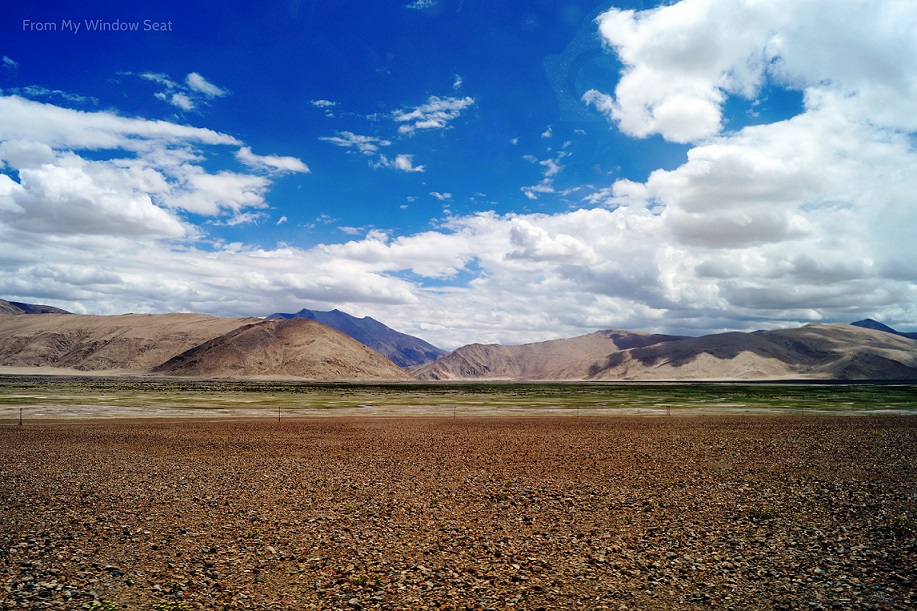 The Battle of Rezang La

Rezang La is a mountain pass at an altitude of around 16,000 ft on the south-eastern approach to Chushul valley in Ladakh. The word La, in the Tibetan language, stands for a mountain pass. Owing to its close proximity to India-China border, the access to Rezang La is restricted and Indian visitors require permits issued by the DC office in Leh to visit the area. The area is completely off limits for foreigners.

During the Sino-Indian War in 1962, Rezang La was witness to one of the bravest battles fought by the Indian soldiers. The platoons of C Company of the 13 Kumaon Regiment were guarding the tactically important Chushul airstrip. Most of the jawans in the platoons came from the Ahirwal region of Haryana’s Gurgaon, Rewari, Narnaul and Mahendragarh districts earning them the sobriquet Veer Ahir. On a bone-chilling bitterly cold morning of November 18, 1962, just as the jawans were shaking off the discomfort of a sleepless night in the freezing cold, they came under attack from the invading Chinese soldiers. 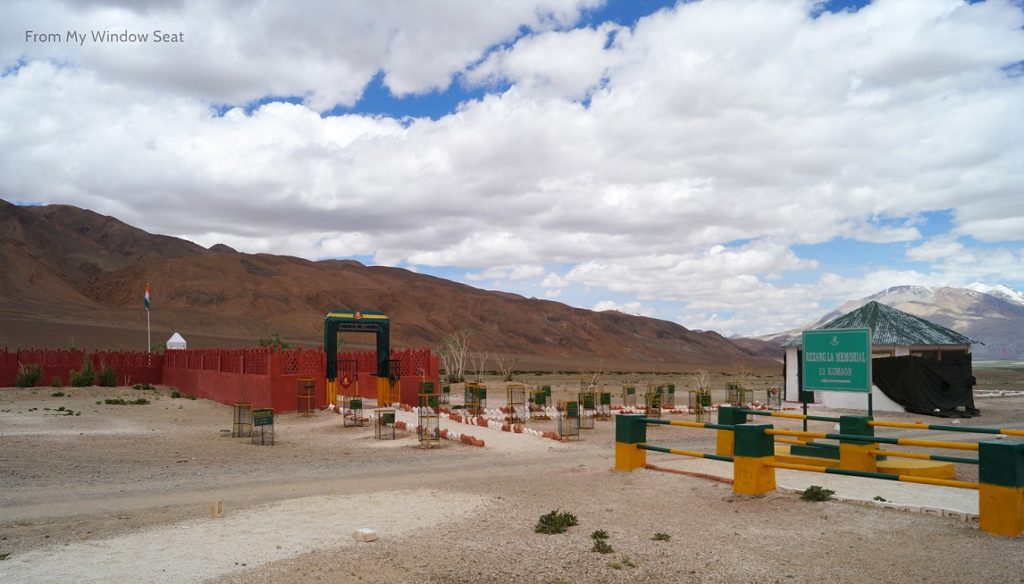 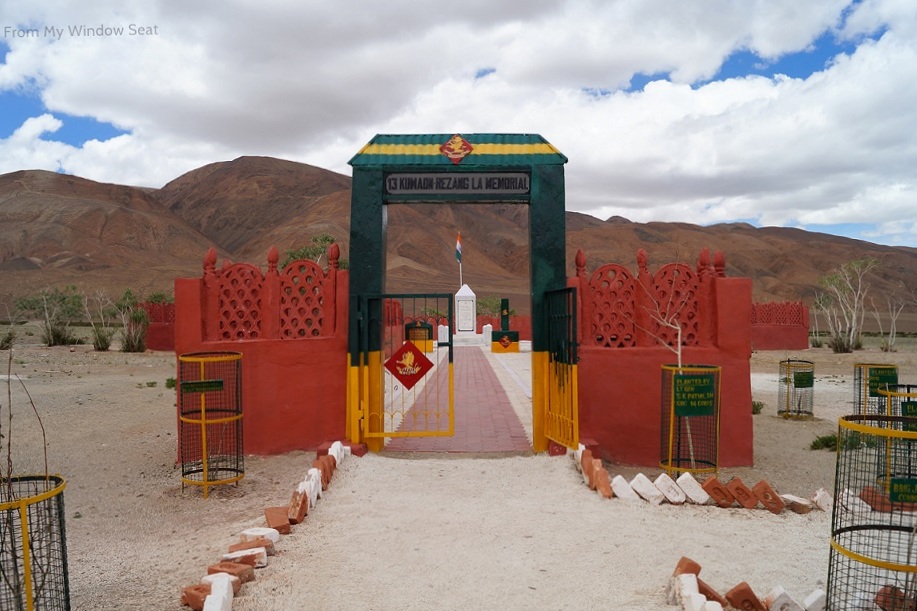 The Indian heroes successfully tackled wave after wave of a much bigger and better equipped Chinese army until they were overrun by the enemy from all sides. As their ammunition ran out, the Indian daredevils came out of their trenches to engage the enemy in hand to hand combat.  As per legend, that day 120 brave Indian soldiers killed over 1300 Chinese soldiers, defending Rezang La till their last breath. Of the 120 men that braved the odds at Rezang La, 114 attained martyrdom, one was sent down from the conflict area as a messenger to convey the details about the battle while remaining five were taken in as captives. These prisoners of wars, however, later managed to escape the enemy camps.

The C Company was led by Major Shaitan Singh Bhati, who with his exemplary courage and leadership skills led his men from the front and along with them laid down his life to protect the integrity, sovereignty, and honour of India. 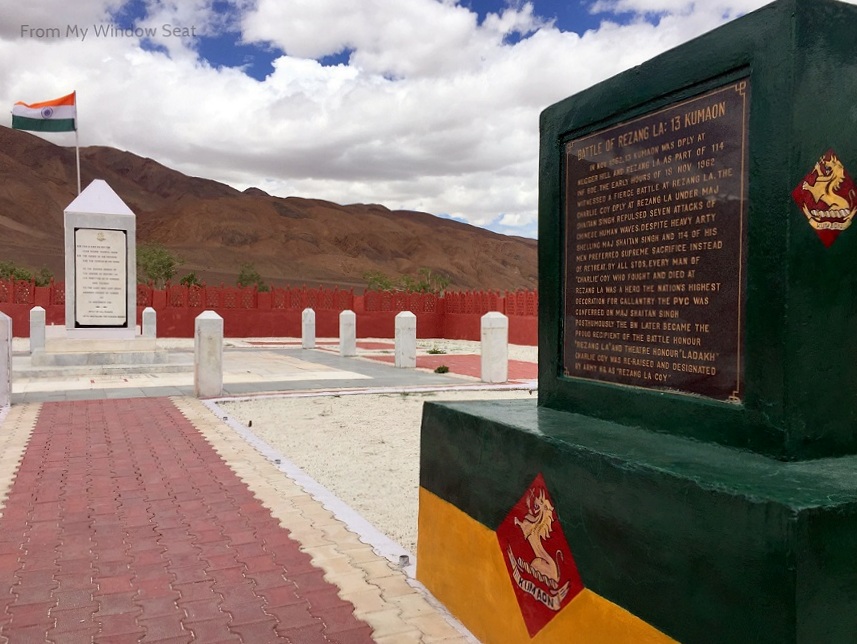 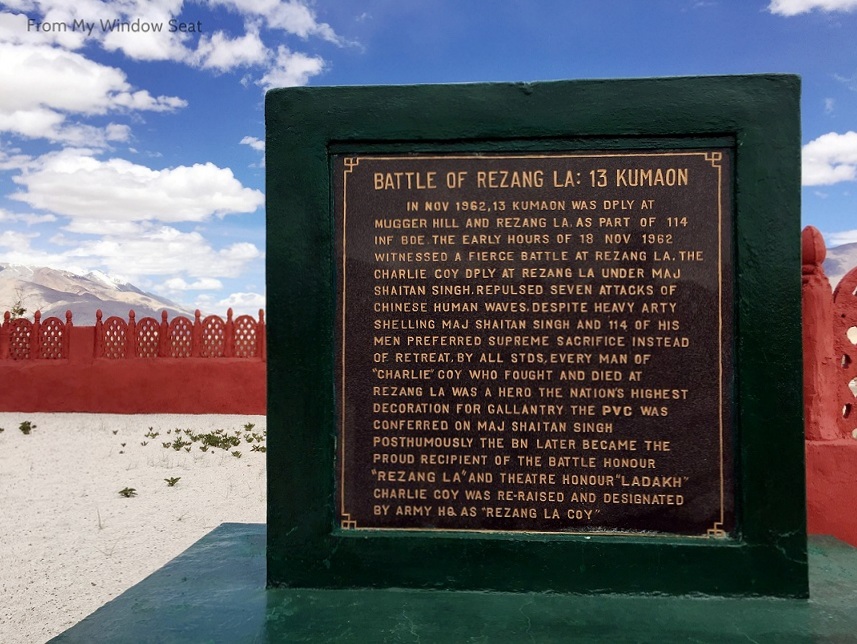 A Tribute to the Heroes of Rezang La

The Sino-India War was a total rout for the Indian army but the Battle of Rezang La was and continues to be a narrative of remarkable courage, daring and supreme sacrifice.  If Ladakh remains a part of our country today, it is thanks to the hardy jawans who fought to the ‘last man, last round’ at Rezang La on November 18, 1962. These men fought savagely against the Chinese troops in blood freezing temperature, bravely took the bull by the horn, and held their ground despite overwhelming circumstances.

The C Company was later awarded 5 Vir Chakras and 4 Sena Medals for their dogged defence and desperate endeavours in the battlefield of Rezang La.

The following lines soulfully underscore the devotion of the brave soldiers- 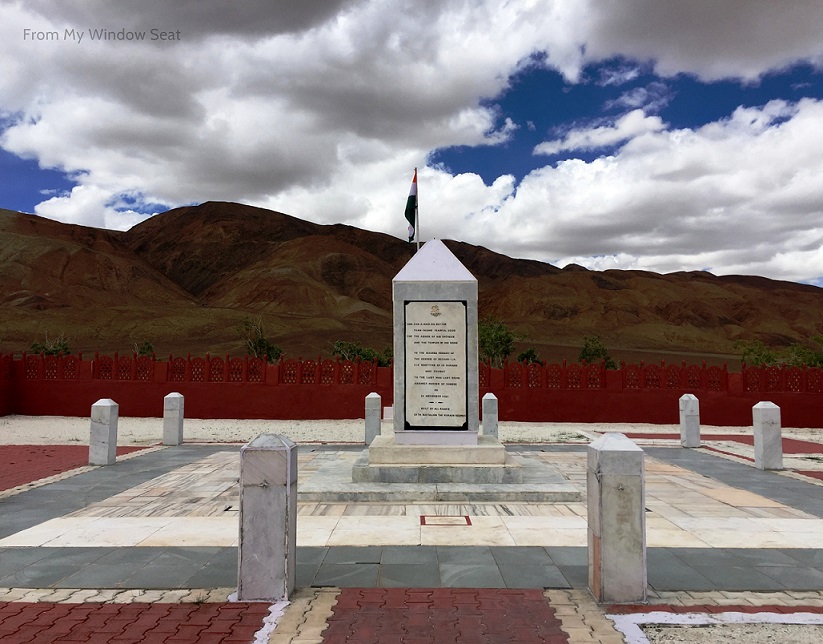 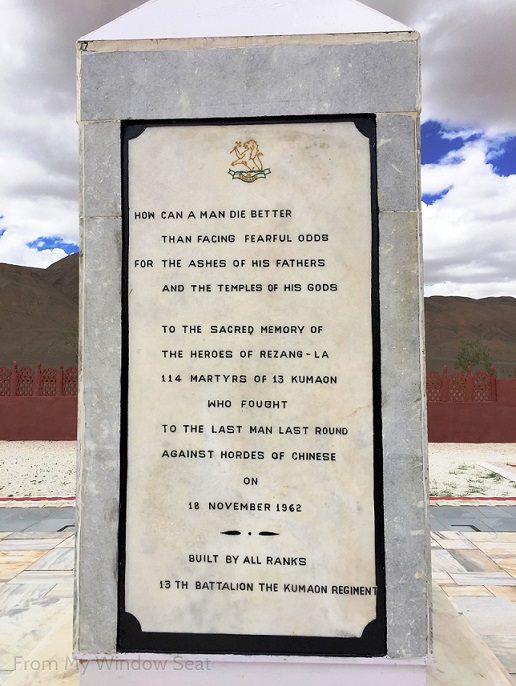 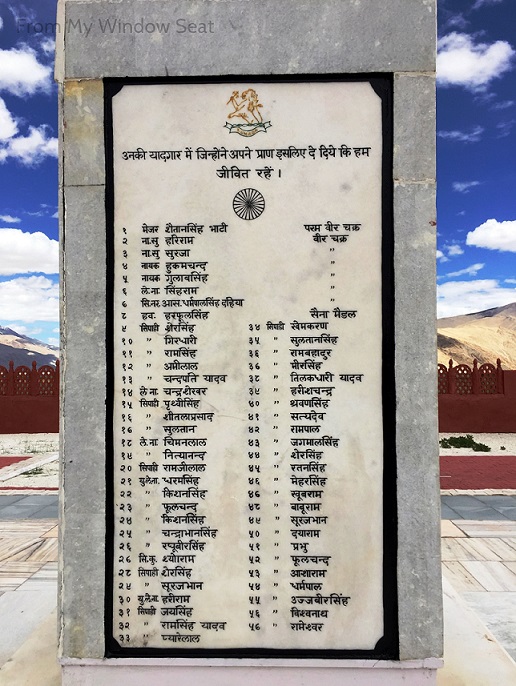 The brave men who displayed unparalleled valour on the field always knew that they were fighting a lost battle. But they refused to surrender and kept retaliating till they finally fell. The Rezang La Memorial bears the name of these 120 heroes of the country, and a heart-rending inscription quoting Lord Thomas Babington Macaulay’s poem ‘Horatius at the Bridge’ sums up their supreme sacrifice –

‘How can a man die better,
Than facing fearful odds,
For the ashes of his fathers,
And temples of his gods.’

To the sacred memory of the Heroes of Rezang La,
114 Martyrs of 13 Kumaon who fought to the Last Man,
Last Round, Against Hordes of Chinese on 18 November 1962.
Built by All Ranks 13th Battalion, The Kumaon Regiment 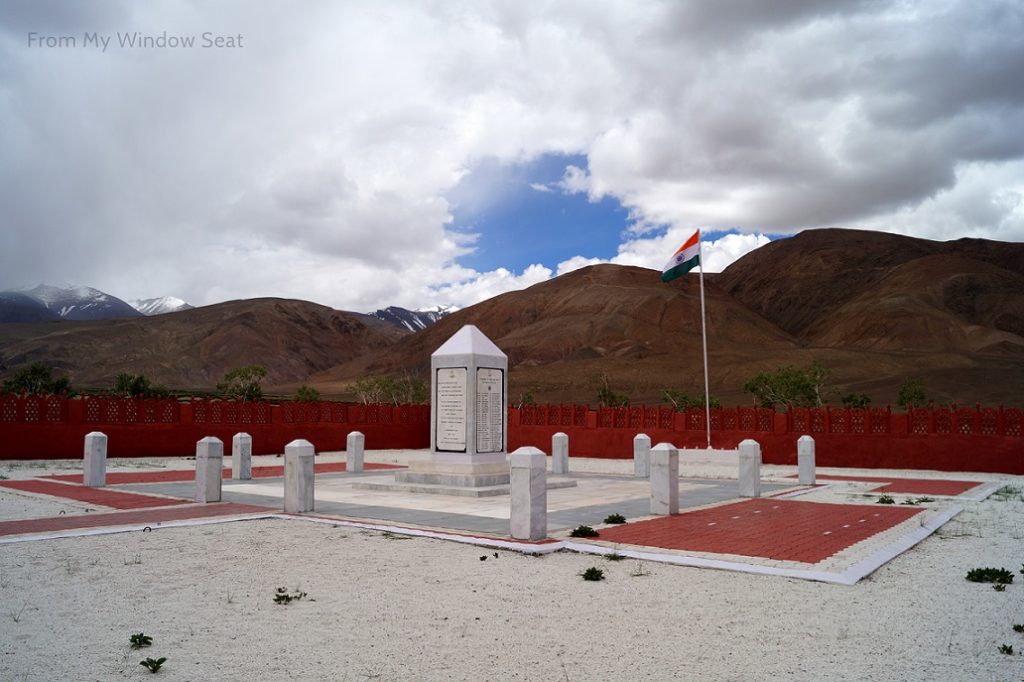 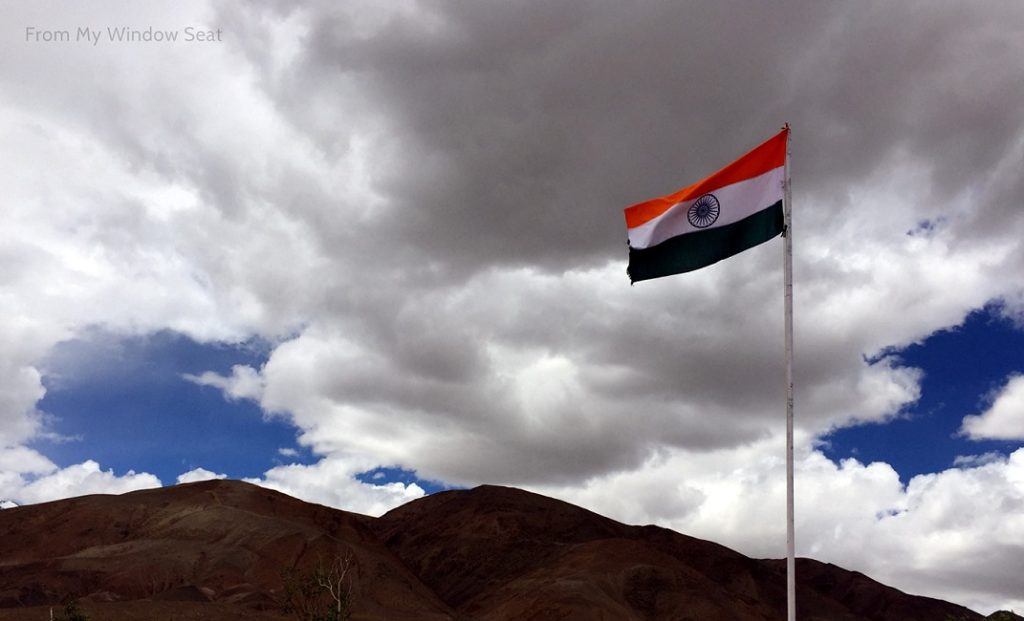 On this heart-tugging note, it is time to wrap up this post. Signing off with heartfelt gratitude towards the soldiers who preferred giving their all when they had the chance to back out. May the story of these warriors who stood their ground never fade away.

Hope you enjoyed reading this post as much as I enjoyed putting it together. Stay tuned for more stories featuring the under Ladakh Chronicles. Leaving you right now with this soul-stirring, goosebump inducing song from the film Haqeeqat, loosely based on the Battle of Rezang La.

Note: I recently visited the Rezang La Memorial while on a Ladakh Road Trip curated and sponsored by Scout My Trip,
in collaboration with OYO.

Ladakh Chronicles: Road Tripping to the Land of Lamas

Nicely summed up with some good research on the events that unfolded here. There couldn’t have been a better post today – on the Independence Day. Thanks Ragini!