The sun is beating down ferociously, compelling me to pull my scarf closer around my head every few minutes.
The metal rim of the sunglasses perched on my nose has started to irk the skin, giving that ever so slight burning sensation.
I can feel the steady trickle of sweat snaking down the back, the dampness of my shirt giving away the moisture it had been soaking.

The folly of wearing flip-flops in scorching sun is showing repercussions already – a pair of dirty, anguished and almost burnt feet are giving me reproachful looks, as if saying – we thought you knew better.

In between all this, the stillness around is strangely striking. There’s miles and miles of nothing but arid terrain – colourless and empty. The sky too is devoid of clouds, being reigned supreme by its sole inhabitant – the savage sun. It’s a surreal feel and I am caught oscillating between two extremes – exhilaration and exhaustion.

I am in the Thar Desert, a few kilometres from Jaisalmer, getting an up, close and personal feel of the 2016 Maruti Suzuki Desert Storm Rally for my blog, on invitation from Maruti Suzuki.

One of the premium perks of being a blogger is the myriad experiences one gets to be a part of. One day you’d be a rallyist in an all-women’s car rally, the same week you’d be flying to a different city to cover a product launch. Some day you’d watch a top chef present a new dish to a select gathering and some other day you’d be covering a top notch motor rally as a media representative. Besides the sui generis experiences, the learning that comes with the territory is immensely inspiring. There’s always some new knowledge to absorb, new skills to learn and new stories to share – and covering the 2016 Maruti Suzuki Desert Storm Rally has been one such experience. I not only got the cover an riveting part of the rally, but also got a good peek into the thrilling world of Motorsports in India.

Rallying as a sport is gradually gaining ground in India and to a large extent, the credit of its growing popularity goes to Maruti Suzuki, India’s largest and undoubtedly the most popular auto-mobile manufacturer.  The car-maker has pioneered a number of motor sports events across the country, and the Desert Storm is one such event from their kitty.

Initiated by Maruti Suzuki in 2003, the Desert Storm Rally puts the rallyists and their machines through extreme weather conditions of the Thar Desert. The endurance level of both the man and the machine is put to test at the competitors navigate across the mostly barren expanse of Rajasthan.

In the Xtreme and Moto-Quad category, the emphasis is on speed, whereas Ndure and Xplore categories run on the TSD (Time-Speed-Distance) format.

In its 14th edition this year, the rally was flagged off from Noida on 3rd April, from where the competitors drove to Rajasthan’s Hanumangarh from where the race began, finally culminating in Jodhpur after 6 strenuous days of rallying.

I am in the Thar Desert, a few kilometres from Jaisalmer, getting an up, close and personal feel of the 2016 Desert Storm Rally.

This is the last leg of the rally, leg 6 – the final run for the finish. With curious anticipation, I focus on the almost invisible track a few metres from me, my ears strained to catch the distant rumble of the racing machines. A few more minutes of wait and the dare-devils part of the final leg of the Xtreme category start zooming by. 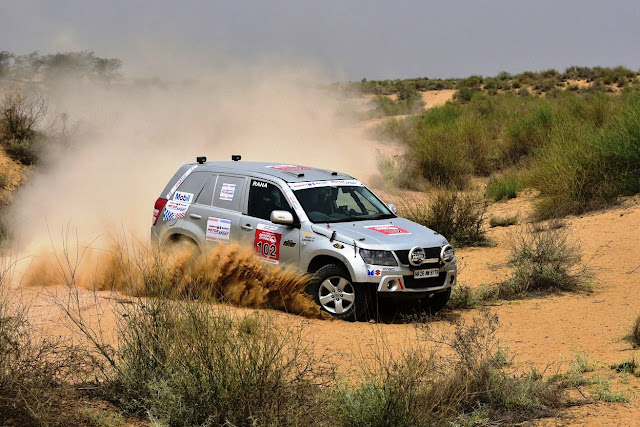 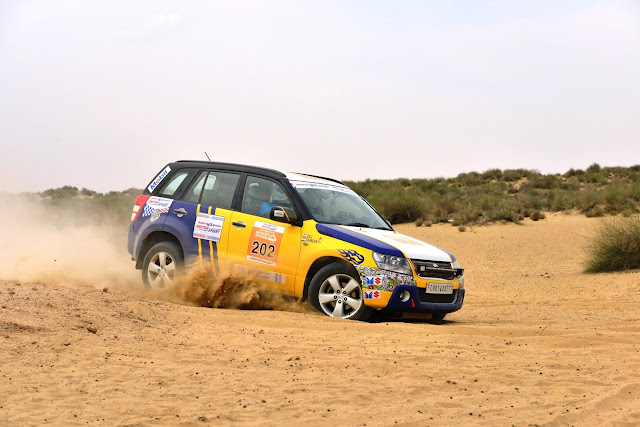 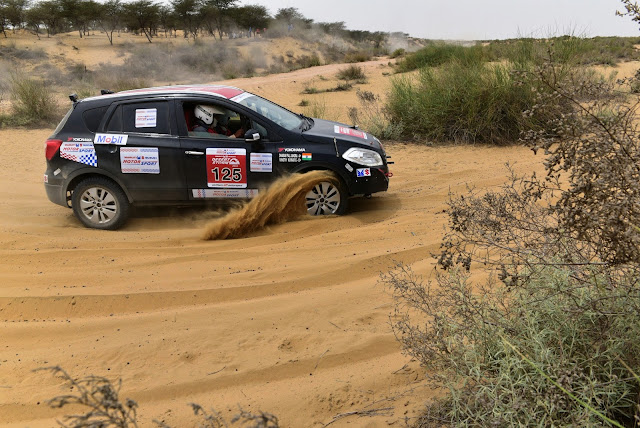 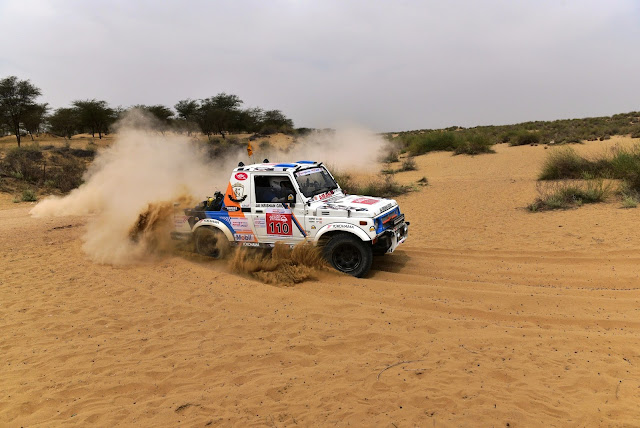 Desert Storm is an annual affair and every year, the rally route takes the rallyists across Rajasthan’s varying topography, ranging from river-drained green plains to barren stretches of land dotted with thorny scrubs and of course the rolling sand dunes. And this year too is no exception. In this last leg, the competitors are tackling a treacherous terrain, a mix of gravelly tracks and tricky sand pits.

After all the competing cars roar by, blasting sand in all directions, it’s the turn of the Moto categoty competitors to take to the tracks. Decked up in their racing gears and kits, they look formidable, traversing the track with utmost single-mindedness. 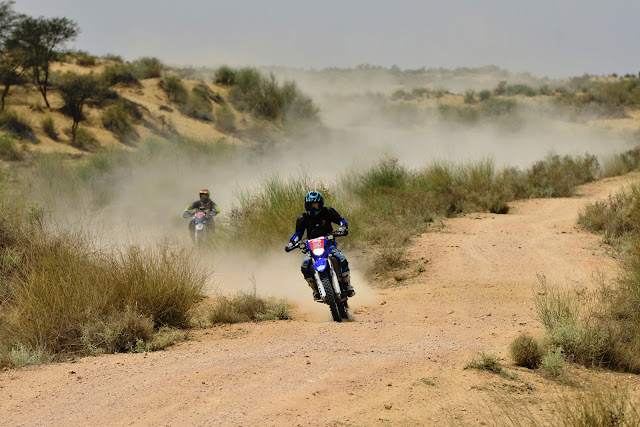 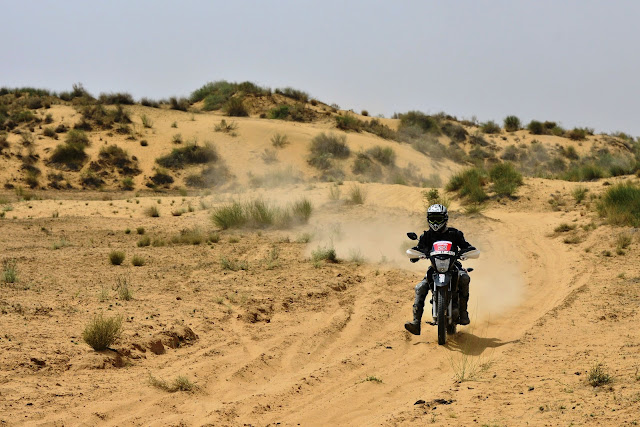 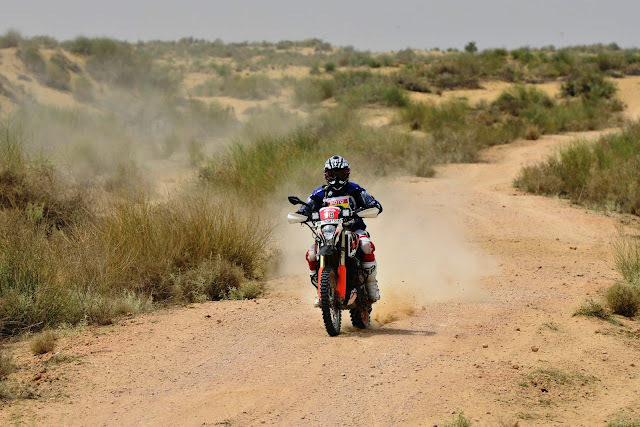 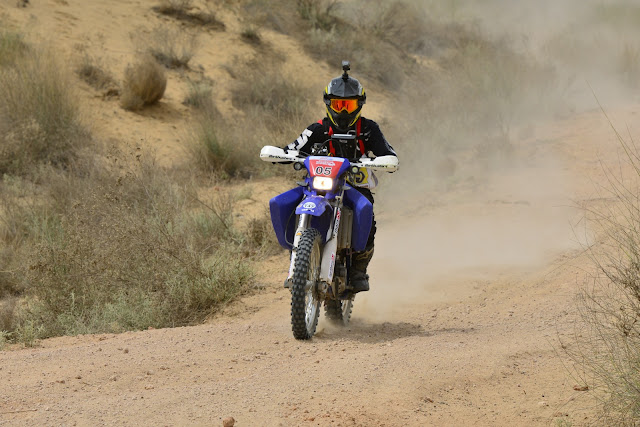 As the last of the racers aggressively dash past, one cannot help but applaud every single one of them for the sheer passion that drives them to be a part of a sports that is not just a test of their driving and navigation skills, but also a test of their grit and determination, a test of their perseverance to drive their vehicle across one of the most inhospitable terrains.

The racers have a long stretch of track ahead of them and as they roar their way towards the finish line, I begin my slow trudge towards the start line where the media vehicles are parked.
The sun’s relentless show of strength is on, trying to pin down the rare desert denizens with its savagery. Suddenly in the distant horizon, a train appears, snaking across the landscape, slithering towards civilisation. The sight is beautiful enough to add a hint of spring to my steps. 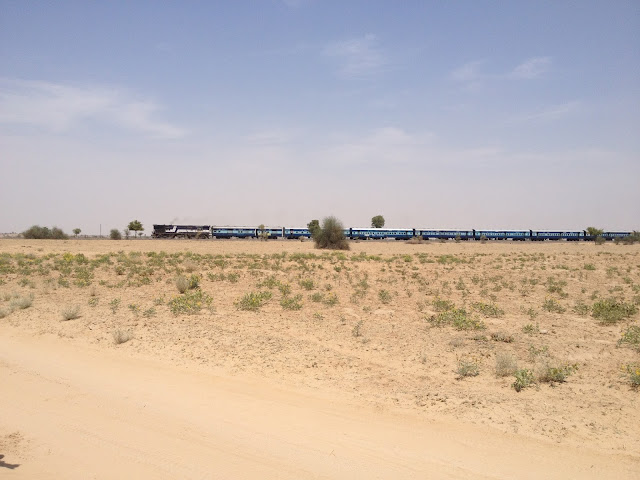 Dear reader, hope you enjoyed the post. In the next post, I will take you to the Desert Storm award ceremony that was organised in Jodhpur and will also give you a little peek into the Sam Dune Party I attended while covering the rally in Jaisalmer. Also, there’s lots more on Maruti Suzuki Desert Storm Rally, Jodhpur and Jaisalmer coming up on the blog. Stay tuned. 🙂

Maruti Suzuki Desert Storm 2016: A Celebratory Wrap Up in Jodhpur

Desert Diva Queen Harish and Half a Night...

Very nicely written.I was feeling the the very fine dust while reading,,, because you have written in a way that who have visited that terrain can understand.
Reading your blog navigates me in that time when I used to read second hand copy of " Discover India" and Travel & leisure ". Because I heard these rally and other like "Raid the Himalaya" from there. Wonderful and lot of thanks

Engaging account of the Desert Storm. Felt as if I was out there in the desert watching the racers go wroom right in front of me. Must be some experience to watch such action from close quarters. Looking forward to more such rally reports!

Enjoyed the post and also got to learn more about the Desert Storm rally. Thanks for sharing.

Thanks for stopping by, Deepak sir.

Thank you, Wild Thinker. Glad you enjoyed the post. 🙂

Indeed a very nice write-up, but can you please let me know that where did you get these pictures from?