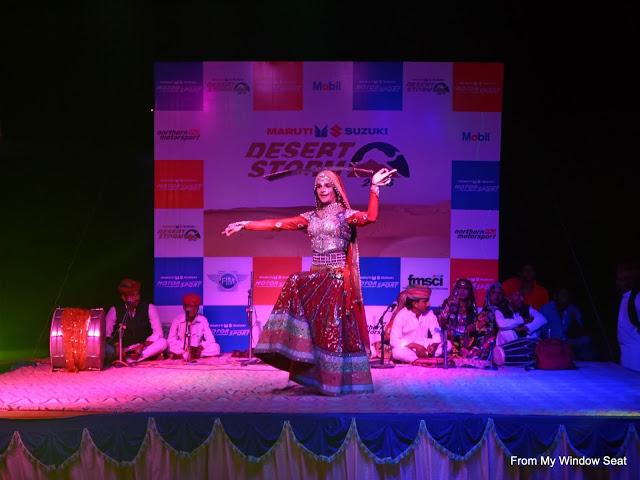 I vaguely remember seeing Queen Harish dancing in a talent show on television.

Harish, a lanky young man from Rajasthan’s Jaisalmer had appeared slightly nervous before the audition but had morphed into a graceful female dancer on stage – taking the judges as well as the audience by surprise.

The elaborate costume, the bright makeup, perfectly arched eyebrows, the fluttering false eyelashes, the seductive smile, the self-assured mannerisms and the flavourful Rajasthan folk dance – everything was on point. It was no surprise that he passed the audition with flying colours, promising the judges with more entertainment in the next level of the talent hunt.

This random episode of the talent show, watched sitting on the family dinner table was promptly forgotten.

Cut to a pleasantly breezy April night in the middle of the Sam sand dunes in Jaisalmer.

Maruti Suzuki has organised a dune party for all part of the ongoing Desert Storm Rally. The idea is to give the participants some time off to relax and unwind post a grueling day under the hard sun. There’s candlelit sitting arrangement, with neat rows of large cushions laid out on the dunes, the makeshift bar is overflowing with beer and banter, the snacks counter is crowded, and the mellow tune of sarangi is wafting in from a low wooden stage set up at some distance.

Just as everyone starts to settle down with their drinks and food, and the loud banter gives way to soft conversations, the stage in the distance dazzles up with a glamorous arrival. Bright red sequined lehenga choli, matching bangles and other assorted jewelry, mascara-lined eyelashes complimenting the perfectly arched eyebrows, bright red lipstick and a smile seductive enough to soften the most hardened of hearts. One cursory glance at her and I go – hey this is the guy from that talent show!

Only this time, ‘the guy’ from the talent show is introduced to the audience as Jaisalmer’s pièce de résistance – Queen Harish. 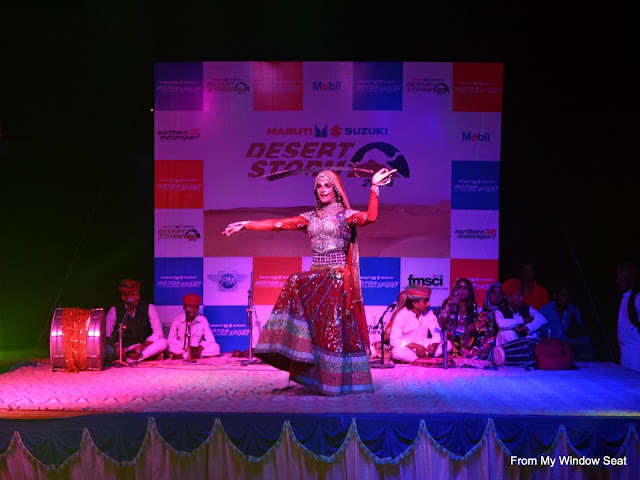 Within minutes, Queen Harish warms up the guests with her quick wit and easy mannerisms, following it up with a lively audience interaction. The build up to her performance is perfect, and in no time she has us all in splits with her merry quips. Just when she is assured of everyone’s attention on her, the talent at dancing and swirling is unleashed, leaving the gathering mesmerized.

Rajasthani folk dance, belly dancing and improvised versions of popular Bollywood dance numbers, she shows us all. She swirls on her knees, causing many a wows to escape from the lips of an awestruck audience. Throughout the performance, her persona keeps changing – from warm to naughty, depending on the song she is performing on.
Only one element remains constant – her spunk. 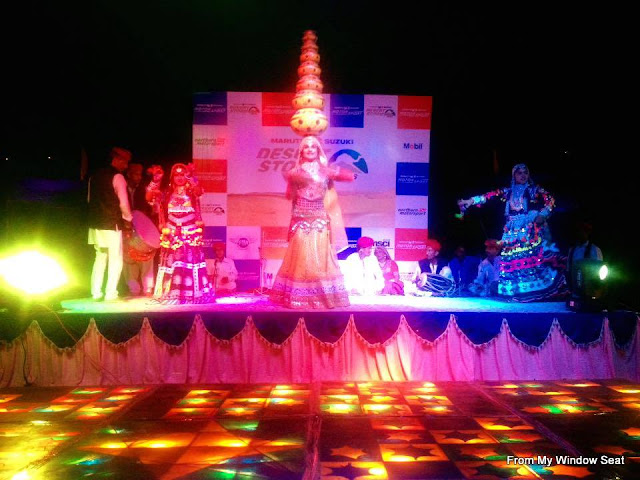 In between the splendid performance, she glides down the stage and beckons fellow blogger Manjulika and me to join her on stage. We are both amused and taken aback. But before we can say a polite no, she’s upon us, her hands holding ours and gently guiding us towards the stage.

Whoa. This is pretty unexpected. We shyly copy Queen’s dance steps on the stage, taking a cue from her subtle eye commands about the moves. We dance for a few minutes and then politely excuse ourselves. Back on our cushions, we have a good giggle about the experience. It’s hard to believe that just a few minutes ago, we were on the stage dancing with the self-made desert diva. Gradually more people from the audience walk up and join the diva on stage.

As the night deepens, the dune party heads towards a wrap. Queen Harish and her troupe members are winding up but now there’s crowd of selfie seekers waiting for her near the stage. Heading off from the party venue we catch a glimpse of Queen Harish patiently posing for selfies with her admirers. Half the night is gone but her energy and enthusiasm remain unbeaten.

Back at the hotel, I google up Queen Harish. There are several news items about her transformation from a spindly young Rajasthani lad to desert diva Queen Harish. While Harish, the man, is a householder with 2 children and other family members to look after, his alter ego – the queen – is a taut-waisted woman with a penchant for the courtesan lifestyle. As the self-styled desert diva, she has performed across the world and is popular in the west as the ‘Desert Drag Queen’. There are testimonials praising her showmanship and foreigners who have interacted with her gush about her charm and hospitality.

I read all the details, amazed at the fact that in a short span of few years, Queen Harish has become an inseparable part of most Jaisalmer itineraries. But the reasons behind this meteoric rise are obvious. While Queen Harish’s dance is immensely entertaining, it’s her affable manners and enterprising attitude that make her stand out in a crowd of other folk performers. So the next time you are in Jaisalmer, make sure you stop by at one of her performances and be enthralled by her nuanced dance moves and chuckle-some wisecracks.

Got to know about her from your blog and more success to the queen!

I had seen her in India's got talent and I had seen her in Jai Gangajal in nazar tori raja. She is famous and for all the right reasons…so graceful! If only everyone always admired talent. Wish the queen all the success!!

I had seen her in India's got talent and I had seen her in Jai Gangajal in nazar tori raja. She is famous and for all the right reasons…so graceful! If only everyone always admired talent. Wish the queen all the success!!

More success to her… 🙂