For the Feathered Friends

by Ragini Puri April 16, 2011 0 comment
The intensive care ward stands in perfect silence, except for the occasional cooing of a patient. Compounder Rameshwar Yadav is busy with his daily chore – head bent at work, he goes from patient to patient administering them their daily dose of food, medicines and vitamins. On the other side of the intensive care ward is the general ward, which too is quiet, but for the twitter of recuperating inmate. 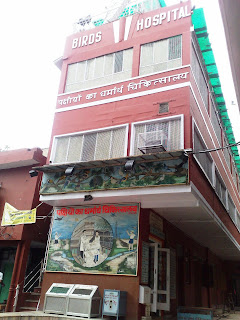 Cooing of patients? Twitter of recuperating inmates? This hospital seems unusual, you will have doubts. Well, your doubts are well founded, since we actually are in an unusual hospital, Charity Birds Hospital, standing right across the Red Fort in Delhi, built and run for some unusual patients – the birds, more specifically, the pigeons and the parrots.
No big deal, you would say. And why not. After all in a world concerned about dwindling number of tigers, who has the time or the energy or the inclination to worry about the commonplace and ubiquitous pigeons and parrots and sparrows. But here, in this modest hospital, are a few people whose lives run parallel with those of the pigeons and the other household birds which they take care of.  And this is what leaves one fascinated. In a world obsessed with 5 seconds of fame, here is a group that goes about treating and taking care of birds with same selfless and meticulous care that they would give to humans. 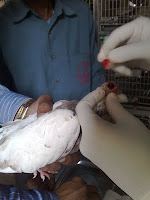 There are the regular attendants – Madan, Udaywaan, Jai Lal, Prakash and Rajendra Nishaad – who work in all earnestness and look after the ailing birds’ daily needs. Then there’s the highly experienced Veterinary Assistant Vinod Kumar, who knows his patients so well that from amongst the hundreds of pigeons that hover over the hospital building, he can tell apart those that have been treated at the hospital and for also what particular problem. The hospital staffs carries out its medical duties under the guidance of Dr. Ashish Singh. While Dr. Singh overseas the medical section, the overall administration of the hospital is looked after by the supervisors, Mr. Ram Krishna Sharma and Mr Prem Narayan Gupta.
Run wholly on charity, this unique hospital had a very humble start. It was founded in 1929, under the patronage of a few Jain believers, in a single room in Chandni Chowk’s Kinaari Bazaar area. And it was the generous donations from the people of all castes and walk of life that helped it to grow from a small one room unit to a fully functional avian hospital. Lord Mahavira’s message of ‘live and let live’ and commitment towards enabling the freedom of all living things, no matter how small or insignificant, were the guiding force behind this noble initiative. 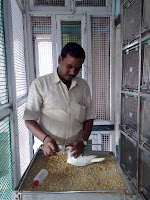 Whether injured by a whirling ceiling fan or by a speeding vehicle, hurt by razor edged kite threads or by the sharp claws of a predator, every single bird that is admitted here is treated with utmost care and kindness. On an average almost 30 to 40 birds arrive here every day – sometimes carried in plastic bags or gingerly held in hands. Many a times, the birds are deposited in a special collection box placed right outside the building. In summers many birds are brought here suffering from dehydration and in winters ailing from pneumonia. They seek remedy for everything – from paralysis and pigeon pox to common cold, and this is what keeps the hospital almost full to capacity all the year round. However, in keeping with Jainism’s central tenet of aversion to killing, the hospital has reservations about admitting carnivorous birds. In very rare and special cases, the predatory birds like eagle, hawk are falcons are taken in. In such cases, these birds are housed in separate enclosures and are fed the same vegetarian diet of vegetables, fruits and cheese, which is given to the other resident birds.﻿

The efficiency and dedication with which this hospital functions leaves one amazed. There are well defined areas not just for the serious patients and those which are recuperating, but also for further research on the birds’ many illnesses. In the research laboratory, besides research on birds’ diseases, medical record of the birds and their recovery progress is also maintained. In the both the wards, small cages line one side of the wall whereas large cages enclosures cover the other side. The birds are first held in the intensive care unit and are eventually transferred to the general wards, where they regain their wings. 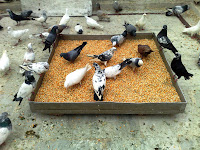 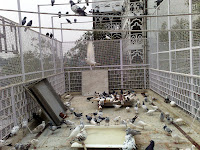 Once the birds recover, a section of the roof is opened from where they fly off. While silence reigns inside the hospital building, its terrace is a witness to a maddening frenzy, since many of the birds treated here hover over, preferring to live around the place which bestowed such mercy and compassion on them. Here they are all around, flying overhead, sitting on specially erected stands, sitting on quaint little bird fountains and the many railings, and yes, bent over the many huge bowls of grains and water. And somehow they all look quite at home here. 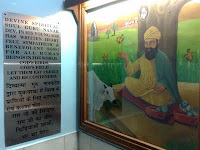 As one leaves this hospital building, the beautiful mural on one of the wall seems to reinforce the display of selfless service and compassion one had just witnessed inside. The mural shows Guru Nanak Dev preaching the lesson of love for all living things. The artwork reads: Ramji ki chidiya, Ramji ke khet, chidiyaaon khao bhar bhar pet. Yes, point taken.
0 comment
0
Facebook Twitter Google + Linkedin Whatsapp

Curious Case of a Ghost Town