#BoltDrives to Neemrana Fort Palace – A Drive to Remember!

‘Get ready to vroom away for a day of fun with the BOLT from Tata Motors’ read the email from BlogAdda, inviting selected bloggers to the Delhi edition of #BoltDrives – a fun initiative from Tata Motors to acquaint bloggers with their new launch – the Tata Bolt. The destination for the drive was Neemrana Fort-Palace, a beautiful heritage resort around 130 kms from Delhi. The idea of a long drive with fellow bloggers, and that too in a swanky new car sounded like much fun, and there I was eagerly awaiting D(rive)-Day, excited about the drive and curious about the car!

The Drive-Day was a Sunday and all the invited bloggers assembled in the Godfather Lounge of Galaxy Hotel in Gurgaon, visibly excited for the event ahead. While Team BlogAdda warmly welcomed us, Team Tata Bolt got down to work, introducing us to the new car and acquainting us with its many innovative features.

While the bloggers got introduced to Tata’s glamorous new offering in the hatchback segment, Team BlogAdda complete the task of putting the teams together, three bloggers in each car, accompanied by a Tata Bolt representative, our companion for the drive, in case we needed any help or guidance during the two-and-half hours drive to Neemrana.

So post feasting on a sumptuous spread of vegetarian and non-vegetarian fare, the bloggers were all ready and looking forward to taking the new Bolt out for a spin. And the cars were ready too – a line of Venetian Red Bolts ready to zoom off down the highway. While the statutory instructions concerning speed limits were passed on, Mr. Jaideep Khanduja , a senior member from my team took to the driver seat, and the other team member, Judy Morris, who made a pretty picture in pink, posed for a few photos with the red Bolt. And soon, we were all all set to BOLT to Neemrana.

Neemrana Fort-Palace, built around 1460s is one of India’s oldest heritage resort hotels.  Located in Alwar district of Rajasthan, this beautiful resort is around 130 kms from Delhi, a distance covered in roughly two and a half hours if you drive down keeping highway speed limits in mind. As we took to the road in the scorching afternoon sun, it was comforting to see that our Bolt had been stocked with all the things we would need during the drive – plenty of water and juices, snacks to munch on and the ConnectNext Touchscreen Infotainment System by Harman preloaded with a huge collection of songs, and guess what, the toll tax money too!

The flag off for the #BoltDrive was soon followed up by a stop over to test the Bolt’s suspension system – and the Bolt of course passed with flying colours. The car was firm on the bumps and despite the artificial rough patch, kept us all cushioned inside.

Suspension test done with, the Bolts were back on the highway, and there was only more stop before we reached Neemrana. This time we puuled over at the Aravalli Resort for a quick refreshments and change of cars. While all this while were driving the diesel model, it was now time to test drive the petrol version fitted with India’s first Revotron* 1.2 litre turbocharged MPFi petrol engine.

*Revotron – The name Revotron is an amalgamation of Revolution and the French word ‘tronel’, meaning ‘balance’. It conveys the essence of this engine brand that uses key technological advances to revolutionize and balance great driving manoeuvrability, without compromising on power or fuel efficiency.
The Revotron 1.2T has been designed based on extensive feedback from car owners and expert drivers from across the globe; observing their driving habits followed by extensive testing in gruelling climatic conditions in India as well as in other countries like the UK and Korea.

Refuelled and refreshed, the #BoltDrives cavalcade was back on the road – a powerful car, comfortable drive, cool music, and mysterious yet chatty Captain Bolt guiding and keeping a tab on all of us – it was fun all the way! And soon we were at our destination, being welcomes by the staff of the iconic Neemarana Fort-Palace. 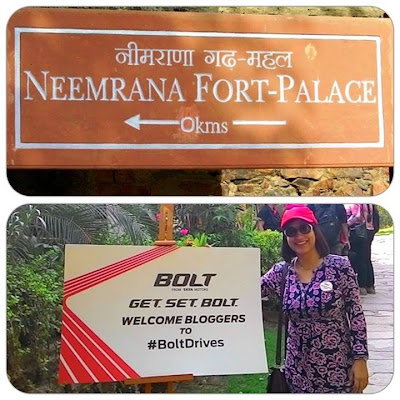 Neemrana Fort-Palace is a photographer’s delight. Every nook and corner of this attractive heritage property is packed with artefacts from the era gone by. From little trinkets to big heirlooms, every single thing has been taken care of with delicate care. While the antiques inside the palace attract heritage lovers, the view of the Neemrana town and the Aravalli rage from the fort-palace is no less fascinating. 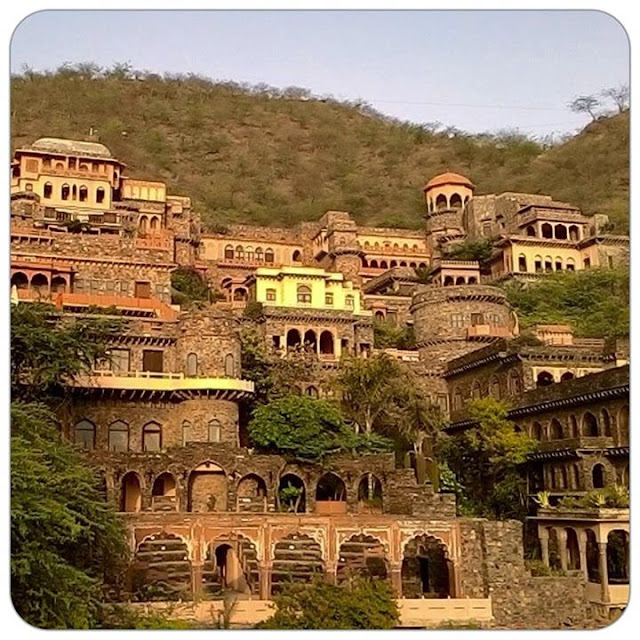 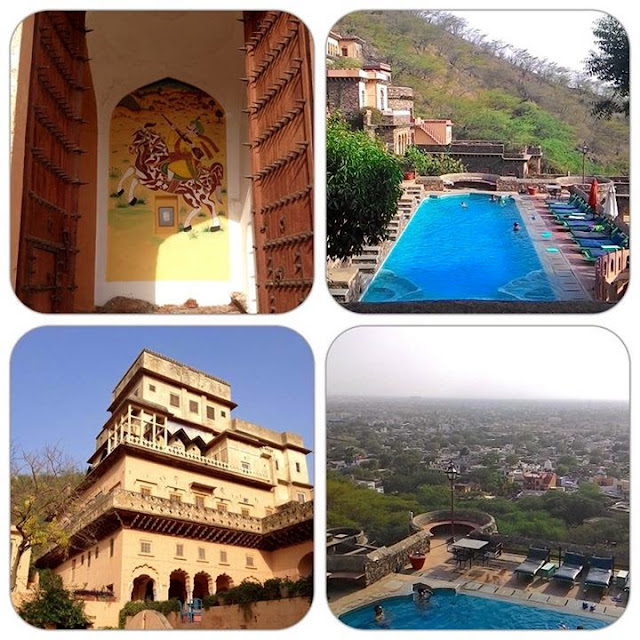 After a guided tour of the fort-palace it was time to head to the Jalgiri Mahal, the palace’s in-house restaurant overlooking the pool area,  for the high tea – which had again was an exotic spread of spicy vegetarian and non-vegetarian fare. While we sat there sipping cup after cup of masala tea, it was good time to mingle with other bloggers and get to know them better. A lot of fun narrative of the #Boldrives followed along with a frenzy of photo sessions. 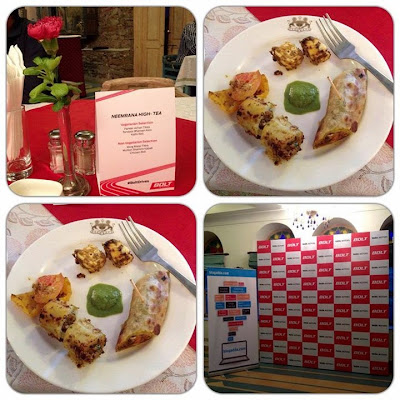 By the time the high-tea was done, it was 7 in the evening and time for #BoltDrives teams to head back to Gurgaon. To wrap the event up, Team Tata Motors and Team BlogAdda took the centre-stage thanking the bloggers for their time. But guess what! Besides the ‘ Thank You’ note, they also had a HUGE surprise up their sleeves – the name of the winner of the GET.SET.BOLT campaign that had earlier been organised by Tata Bolt in association with BlogAdda. And I could not believe my ears when the winner’s name turned out to be mine! I had to get up and ask them again, to be doubly sure that I had heard the name right! 😀

Yes! I was the winner of a swanky new Tata Bolt! How exciting was that! Check out my expression here! 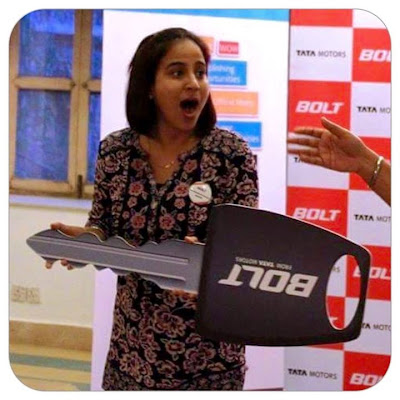 Now this was a more than perfect wrap up of the fun day spent with brand new Bolts and awesome fellow bloggers. And here I must say a warm thank you to the very cheerful and efficient members of Team BlogAdda, who not just had fun with us but also ensured that our experience with #BoltDrives went glitch-free. Every detail of the drive was planned and executed with great detail, making it a drive to remember forever!

And now before I wrap this post up, here’s a video where RCB giants Virat Kohli, Chris Gayle and AB de Villiers talk about the innovative features of glamorous and powerful Tata Bolt! For more details about this car, you can check Tata Bolt’s website.

A day well spent at #BoltDrives with Bolt from Tata Motors in association with BlogAdda.